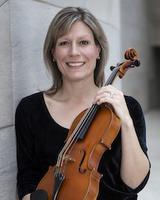 Violist Ann Marie Brink has performed in solo and chamber music recitals at Carnegie Hall, the Mostly Mozart Festival at Lincoln Center, Aspen Music Festival, Library of Congress, Severance Hall, Rockport Music Festival, Newport Music Festival, Banff Centre for the Arts, Interlochen Center for the Arts, Chamber Music Chicago, and the Bravo Vail Valley Music Festival, and has been a featured soloist with the Dallas Symphony.  An avid chamber musician, Ms. Brink’s performances with the Amernet String Quartet were praised by the New York Times as “an accomplished and intelligent ensemble.  Their fine performances were most notable for the quality of unjaded discovery that came through so vividly.”  She has coached and performed in residencies for Chamber Music America with the Cavani String Quartet, has twice been a fellow at the Aspen Center for Advanced Quartet Studies and was invited by Isaac Stern to perform in his Chamber Music Workshop at Carnegie Hall as violist of the Cambiata String Quartet.  First-prize winner in both the Nakamichi Foundation Concerto competition at the Aspen Music festival she was also awarded Florence Allan Award at the Carmel Chamber Music Competition as a member of the Cambiata String Quartet.

First introduced to the viola at the age of ten in a public school strings class, Ann Marie became one of the youngest members of the Pensacola Symphony, performing in the viola section while a freshman in high school.  She later enrolled at Interlochen Arts Academy, where she was a featured soloist with the World Youth Symphony, received a Fine Arts Award and graduated with high honors.  Ann Marie received her Bachelor of Music with academic honors from the Cleveland Institute of Music and was awarded the Jim Hall prize for achievement and leadership in music.  She received her Master of Music from the Juilliard School, where she was awarded the prestigious William Schuman Prize, the single graduate prize given at commencement exercises.  Her principal teachers were Karen Tuttle, Heidi Castleman and David Holland, and her chamber music mentors include the Emerson, Juilliard, Cleveland, Orion, and Cavani String Quartets.  Ms. Brink has served on the faculties of Baylor University, Southern Methodist University, University of North Texas, Interlochen Arts Camp, Wintergreen Academy, Hot Springs Music Festival, and Music in the Mountains Conservatory.

In 2019, after performing 20 seasons as Associate Principal Viola of the Dallas Symphony, Ms Brink joined the faculty of DePaul University School of Music in Chicago, serving as Assistant Professor of Viola.

When not playing the viola, Ann Marie can be found in the kitchen, at the pool, or lacing up a pair of running shoes.  A frequent traveler to Europe, she has studied and performed traditional Irish music in County Kerry, Ireland, and has taken numerous classes at the Apicius Culinary Institute in Florence, Italy.  A US Master's swimmer since 2001, Ann Marie has twice completed the 10-mile Maui Channel Swim, the only inter-island relay race in the world.   She has run ten marathons including the Boston, New York, and Marine Corps Marathons.  Seven of these were spent chasing her husband, Greg. She hopes to beat him in the Chicago Marathon someday.

Ms. Brink served for over seven years as a Court Appointed Special Advocate for abused and neglected children in the foster care system in Dallas, TX.