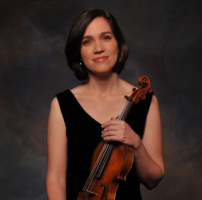 Violinist Carolyn Huebl enjoys a varied career as a soloist, chamber musician, and teacher. She is currently Professor of Violin at the Blair School of Music at Vanderbilt University and violinist of the Blakemore Trio. Prior to her appointment at Blair, she was Assistant Principal Second Violin with the Pittsburgh Symphony and Assistant Professor of Violin at Carnegie Mellon University. Critics have called her performances “unfailingly sensitive”, “utterly fearless”, and “pristine”, and STRAD magazine declared that she “possesses a beguilingly warm sound and highly responsive expressive personality.” Since her appearance as soloist with the Detroit Symphony at the age of seventeen, Carolyn has soloed with orchestras throughout the United States, as well as in Argentina and Canada. She is an enthusiastic and convincing interpreter of contemporary music, and has commissioned several new works. Together with pianist Mark Wait, she recently released recordings of the works for violin and piano by Igor Stravinsky, and the complete sonatas by Alfred Schnittke. Both recordings were received with great critical acclaim. In February of 2015, the duo gave the world premiere of Zwischen Leben und Tod, written for them by American composer Michael Hersch. They have also performed this important work at the new music venues National Sawdust in Brooklyn, NYC, and The Icebox in Philadelphia. Schwarz, and Michael Slayton. In 2002, Carolyn founded the Blakemore Trio with cellist Felix Wang and pianist Amy Dorfman. Engagements have taken the trio to chamber series across the country including a New York debut concert at Merkin Hall in 2010. The trio recently released their first recording of trios by Beethoven and Ravel on the Blue Griffin label. American Record Guide gave special note to the Ravel recording as “Impressionism at its best”. In 2013, they released Gates of Silence, by Susan Botti, on the Albany label. Carolyn often performs as concertmaster of the IRIS orchestra, under the direction of Michael Stern. During the summer, Carolyn has been featured on chamber series throughout the country, including the Walla Walla Chamber Festival.  This summer she will be on the faculty of Green Mountain Chamber Music Festival and Madeline Island Chamber Music. She has also taught at the Brevard Music Center, Rocky Mountain Summer Conservatory, National Music Camp at Interlochen, Intermountain Suzuki Institute, and the Killington Music Festival, and has presented master classes at leading schools of music across the country. Her students have been prize-winners and finalists in national competitions, and hold orchestral and teaching positions throughout the United States and South America. She received her DMA from the University of Michigan and Bachelor and Masters of Music from the Cleveland Institute of Music.  Her primary teachers include Andres Cardenes, Paul Kantor, and Donald Weilerstein.