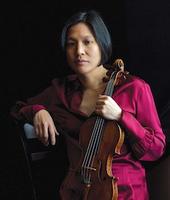 Elizabeth Chang, violinist, enjoys a varied career as performer, teacher, and arts administrator. She is currently Professor of Violin at the University of Massachusetts Amherst and a member of the violin and viola faculties of the Pre-College Division of the Juilliard School. Ms. Chang is Artistic Director and founder of the Lighthouse Chamber Players as well as co-founder and co-organizer of the Five College New Music Festival and the UMass Amherst Bach Festival and Symposium. She also co-founded the NYU Intensive Quartet Workshop in the summer of 2002 and founded and directed The School for Strings Intensive Chamber Music Workshop from 2003-2007. She was formerly a faculty member of New York University, the Mason Gross School of the Arts at Rutgers University, The School for Strings, and the Harlem School of the Arts.

Ms. Chang has collaborated closely with a number of composers on new works for violin, most notably and extensively with Salvatore Macchia, Eric Sawyer, and Lewis Spratlan. Prior to her appointment to UMass, Ms. Chang toured and recorded extensively with the Orchestra of St. Luke's and the Orpheus Chamber Orchestra and performed with a number of new music groups based in New York City.  In April 2021, Ms. Chang released the CD Transformations:Works by Kirchner, Sessions, and Schoenberg with Albany Records.

A native New Yorker, Ms. Chang is a graduate of Harvard University and was the recipient of the Presidential Scholar in the Arts Award and the Beebe Fellowship for Study Abroad awarded by New England Conservatory. She was a student of Louise Behrend, Joseph Fuchs, Roman Totenberg, Max Rostal, Leon Kirchner and Luise Vosgerchian.