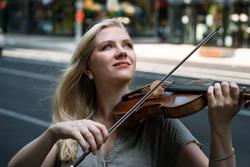 Boston native Julia Glenn has been hailed as "remarkable," "gripping," and "a brilliant soloist" by the New York Times and performs internationally on modern and baroque violins. She recently joined the Lydian Quartet and the faculty of Brandeis University after teaching for three years at the Tianjin Juilliard School, where she served as violin faculty and was a member of the Tianjin Juilliard Ensemble.

Ms. Glenn has appeared on stages including Alice Tully Hall, Carnegie Hall’s Weill Hall, Sanders Theatre, Jordan Hall, the Beijing Recital Hall, Beijing's National Centre for the Performing Arts, and Shanghai Concert Hall. She has recently performed with the Shanghai Camerata, New York New Music Ensemble, ACRONYM, Cantata Profana, members of the Juilliard String Quartet, and Soloists of New England. In January of 2016 she gave the world premiere of Milton Babbitt’s violin concerto to critical acclaim; her article on the work was published in 2022 in Contemporary Music Review. Julia loves teaching almost more than anything, and finds performing and teaching inextricably linked.

With a deep interest in exploring and sharing the music and culture of China, Julia enjoys drawing on her backgrounds in phonology and Chinese language to open up new avenues in perception and performance. Her dissertation was titled “Hearing in Tone: A Phonetic Approach to the Analysis and Performance of Chinese Contemporary Music.” As the recipient of Juilliard’s 2019 John Erksine Faculty Prize, she is currently working with Chen Yi on a video project to commission and film dance choreography for Chen’s Memory. This past summer she recorded a solo album of new and recent music by Chinese and Chinese-speaking composers, to be released spring 2023. She has presented talks and lecture-performances on her work at the Harvard Shanghai Center, Hamburg Hochschule für Musik und Theatre, Harvard University, Shanghai Conservatory, Beijing Central Conservatory, and Juilliard.