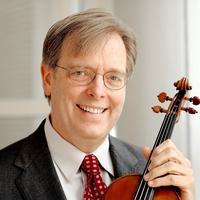 Founder & Violin
University of North Carolina School of the Arts

Praised for his "vibrant intensity," (The Times, London) and playing "supremely convincing in its vitality," (Cleveland Plain Dealer), violinist Kevin Lawrence has consistently elicited superlative responses for his performances throughout the United States and Europe. His assertive style and strong musical personality have thrilled audiences at Merkin Hall, Carnegie Hall and Alice Tully Hall in New York, the National Gallery of Art in Washington, DC, and in Houston, Chicago, London, Frankfurt, Rome, Prague, Moscow, St. Petersburg, and Amsterdam, where the Dutch press described him as "simply miraculous" (Het Vaderland).

Lawrence has premiered sonatas by contemporary American compositional voices Laura Kaminsky and Judith Shatin, and chamber works by Evan Chambers, Michael Rothkopf and Lawrence Dillon. His release of the complete violin works of the American composer Arthur Foote on the New World label was "highly recommended" as "beautifully played" by the Washington Post, and heard on Ken Burns’s PBS series “Not for Ourselves Alone”; his second CD of American violin sonatas, released recently by New World, was hailed as “vital playing” and “a labor of love” by Classics Today.com. He is also heard with renowned flutist Carol Wincenc and three other artists of the Green Mountain Chamber Music Festival on a recording of American flute quintets released by Bridge Records, and named as 2012 Critics Choice by American Record Guide.

Lawrence received his musical education at the Juilliard School as a student of Ivan Galamian and Margaret Pardee. While at Juilliard he also studied chamber music with Felix Galimir and continued his chamber music study with Josef Gingold at the Meadowmount School in Westport, New York. In 1980, Galamian appointed Lawrence to the Meadowmount faculty, where he taught for 14 summers. After serving as dean and then artistic director of the Killington Music Festival, he founded Green Mountain Chamber Music Festival in 2004; since retiring as festival director at the conclusion of the 2021 season, he serves as artistic director emeritus.

Lawrence has given master classes throughout the United States, and in Germany, Austria, Bulgaria, Romania, the Czech Republic, Russia, Israel, Korea, Thailand, Costa Rica and Venezuela. He is currently the chair of the string department at the University of North Carolina School of the Arts, which recognized him with its Excellence in Teaching Award in 2007.