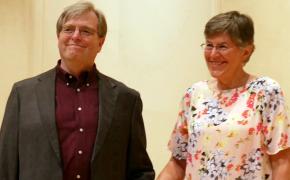 On July 20, at the final artist-faculty concert of the 2021 season, Green Mountain Chamber Music Festival founder Kevin Lawrence announced his retirement as Artistic Director of the festival. Joined by Barbara Lawrence, who has served as the Business Manager since 2006 and who will also be retiring from her position, Lawrence was called to the stage after words of appreciation by Board President Fran Pepperman-Taylor. “I am happy beyond words at what this festival has become,” Lawrence said; “I’m grateful to our wonderful faculty, board and supporters for embracing the effort to build a musical community that lives out to such an impressive extent the musical ideals we share.”

The Festival’s Board of Directors is engaged in the search process for Lawrence’s successor, who will be  announced shortly. As Director Emeritus, Lawrence will assist in the search and in the transition process.

The musicians of the Green Mountain Chamber Music Festival are performers of the highest caliber, acclaimed artist faculty who have come to Burlington to work with some of today's finest students from all areas of the United States and across the globe.